Over the past decade, AVOD has become one of the most lucrative distribution models for OTT video. AVOD revenues for TV series and movies in 2021 reached $12.9 billion in the United States and more than $33 billion globally.

For content sellers working to maximize the value of their assets through strategic licensing, AVOD distributors can deliver access to a wide viewership in addition to excellent revenue-earning potential. In this blog post, we’re taking a look at the top 10 most popular AVOD platforms driving OTT content monetization strategy.

A quick history of AVOD

The first AVOD wave began with the launch of social video-sharing platforms like Dailymotion, Vimeo, and especially YouTube in the mid-2000s.

YouTube was officially launched in 2005 and grew rapidly, receiving a reported 100 million video views per day by July 2006. Following its incredible growth, YouTube was acquired by Google for $1.65 billion in October 2006.

YouTube was focused on building a dedicated ecosystem of content creators and consumers, but it was time for Google to shift some of that focus to monetizing the platform in a way that could start recouping their investment.

Google began running in-video ads on YouTube in August 2007, resulting in one of the earliest implementations of the AVOD business model. By 2009, YouTube was showing ads in seven different formats and YouTube audiences were generating more than 1 billion video views per day. YouTube is now the world’s leading AVOD platform. After four consecutive years of 30%+ growth in advertising revenue, the company is set to generate more than $30 billion of AVOD revenue in 2022.

The second wave of ad-funded VOD platforms launched in the mid-2010s, including services like Xumo (launched 2011), Tubi (launched 2014), and the Roku Channel (launched 2017). Unlike earlier video-sharing sites that relied on community-generated content, these newer AVOD services built digital libraries of movies and TV series licensed from content sellers, monetized the viewing experience with paid advertisements, and allowed audiences to watch for free.

AVOD vs. SVOD vs. FAST – What’s the difference?

As OTT video streaming has grown in popularity during the past decade, AVOD has emerged as a lucrative distribution model for video content. At the same time, we’ve witnessed the rise of subscription video-on-demand (SVOD) streaming services where audiences pay a monthly fee for unlimited access to stream video content.

And in the last 3-4 years, we’ve witnessed the rapid growth of free ad-supported streaming TV (FAST), a new kind of OTT video streaming service where video content is monetized with advertisements and presented in a linear TV format that’s similar to traditional cable or satellite TV.

While AVOD, SVOD, and FAST all have unique origins, the largest OTT video streaming providers in 2022 are experimenting with hybrid distribution strategies that incorporate more than one model (e.g. AVOD, SVOD, FAST, transactional video-on-demand (TVOD), etc.) to maximize revenue generation. YouTube is the world’s largest and most successful AVOD platform, with 1.7 billion unique monthly visitors spending an average of 19 minutes per day on the platform. YouTube is also the second-most visited website on the Internet (right after the Google homepage) with more than 14 billion monthly visits.

Launched in 2020, the Peacock OTT streaming service is operated by the TV and Streaming division of NBCUniversal, a subsidiary of Comcast. The platform has grown rapidly in just a couple of years, reaching 30 million monthly active users as of September 22. Peacock offers a free ad-supported subscription (AVOD), along with paid subscription options for an ad-free viewing experience.

Launched by Roku Inc. in 2017, the Roku channel is a free, ad-supported streaming service available on Roku Streaming devices. The Roku Channel reported more than 63 million monthly active users in the US in August 2022.

Founded in 2014 and purchased by the Fox Corporation in 2020, Tubi is one of the most popular AVOD services available. In early 2022, Tubi announced that it had reached 51 million monthly active users and a total viewing time of 3.6 billion hours of content in 2021.

Xumo launched in 2011 and was acquired by Comcast in 2020. The platform offers a selection of OTT linear television channels (FAST) and on-demand video content (AVOD), all funded by advertising.

Crackle was founded as an AVOD service called “Grouper” in 2004 before being acquired by Sony in 2006 and re-branded as Crackle in 2007. Sony eventually sold its stake in the platform to Chicken Soup for the Soul ENT. Crackle’s viewership includes 40 million monthly active users as of January 2022.

Owned and operated by Paramount Global, Pluto TV is a hybrid FAST/AVOD platform featuring ad-supported video content in both linear and on-demand formats. The platform boasts an engaged audience of 72 million monthly active users as of October 2022.

Hulu has a unique story as an OTT video streaming service. The platform launched in 2007 as an ad-funded service but would launch a subscription-based (SVOD) service tier just three years later. In doing so, Hulu became one of the first OTT media companies to adopt a hybrid, multi-tier distribution strategy.

Hulu is now jointly owned by Comcast and Disney. The platform licenses film and TV content from networks like Bravo, Oxygen, and Fox Sports, as well as larger content sellers like Lionsgate, FX, DreamWorks Animation, IFC Films, and Magnolia Pictures.

Prime Video is widely known as Amazon’s SVOD video streaming service, but the platform has been adding new content to its library of ad-supported TV and movies since 2019. Amazon also acquired the AVOD platform IMDB TV (now rebranded to Freevee) in the same year.

As part of these changes, many of the less popular titles owned by Amazon have been removed from Prime’s SVOD catalog and monetized with ads through its AVOD services. Amazon owns the largest content library available, licensing content from creators and sellers around the world. That includes deals with Universal Pictures, Lionsgate, FilmRise, MovieSphere.

Netflix was one of the first SVOD services, launching in 2006 and growing into the most successful subscription-based OTT streaming provider with 220 million subscribers and nearly $30 billion in annual revenue (2021).

Netflix recently launched a new, ad-supported version of its streaming service. Instead of paying the full subscription price, audiences can opt to pay a lower monthly subscription fee for a viewing experience that includes advertisements.

The proliferation of new AVOD and hybrid-monetized OTT platforms has made things significantly more complicated for content sellers who manage their licensing deals using legacy software tools. Some of the most common challenges include:

With multiple distributors reporting revenue at different cadences and with different licensing terms, it’s now more challenging than ever for content sellers to track the performance of their assets and know which titles and distributors are driving the strongest ROI.

Distributor compliance is another big challenge for content sellers managing licensing agreements across multiple AVOD platforms. Revenue leakage is preventable but depends on content sellers being able to find answers to questions like: 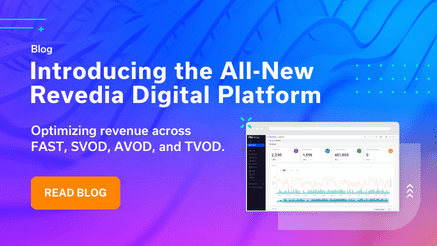 Our Revedia Digital platform gives content sellers the ability to:

Check out our blog Introducing the All-New Revedia Digital Platform for more details, or request a demo of Revedia Digital to see how you can maximize revenue generation from your video content on AVOD platforms.

LEARN ABOUT GENERATING REVENUE VIA FAST

How to Aggregate and Normalize Data from OTT Platforms